A responsive Drupal website created for our client Westfield Labs. 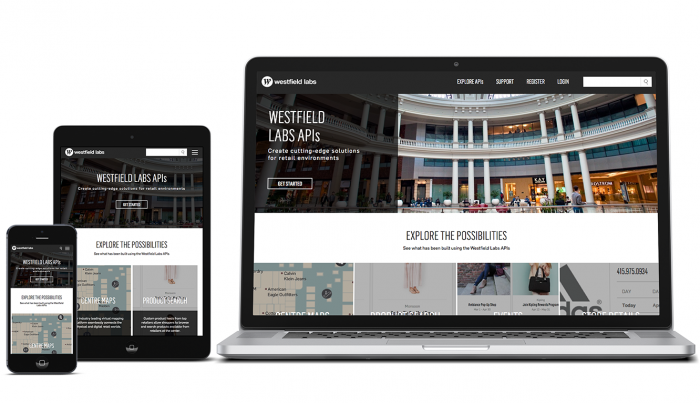 Westfield Labs had partnered with Apigee for their API platform, which included a powerful Drupal 7 Developer Portal website hosted on Pantheon. Unfortunately this Apigee distribution came packaged with a hardcoded Bootstrap theme that could not be easily changed, as well as having mostly fixed UX flows. Westfield required a new responsive theme to match their brand standards and other web properties - a Bootstrap UI simply was not going to cut the mustard. Additionally the user flows relating to API key management and API method interaction needed to be highly customized with a look and feel similar to standard Swagger API documentation.

The theme, modules, and SDK (software development kit) created by Apigee for their Drupal API Developer Portal product contain hundreds of thousands lines of code! Before cusomization could begin we gave their code an audit to determine an optimal strategy for our client. We often worked in collaboration with Apigee to gain an understanding of the proper ways to utilize their API tools and services, keeping in mind that their code was a moving target out of our control. The existing Apigee themes also had to be audited, with the idea that we would pick and choose various pieces for our new custom theme.

We set out to create a clean, new Drupal Omega responsive theme, and began rebuilding the Apigee functionality that was lost in their stock theme. This included unraveling Bootstrap-coupled technical debt such as modal forms, tabs, and other undesirables. The new, beautiful responsive theme was based on UX and wireframes that came from the in-house team at Westfield Labs. We worked closely with these creative and marketing teams to ensure their content and designs were implemented correctly into Apigee's API universe. Javascript was also used heavily in the theme to customize components such as High Charts analytics.

Custom Drupal modules also had to be created, with the goal in many cases to override functions present in the Apigee SDK. Since Apigee's modules are contained in their own Drupal distribution, which is implemented on the Pantheon hosting platform as an upstream repo, this meant Apigee code patching was not an option. In some cases, where code overrides were not possible, we asked Apigee developers to intervene with their own customizations.

While the Apigee Drupal Portal comes stocked with a few content types (some mandatory, some optional) our client needed further refinement. We helped them determine the best strategy in customizing existing fields as well as in creating new content types and fields. Account profile fields are especially important in a Developer Portal site, and Apigee also provides custom attribute fields that are automatically synched to their cloud. Both of these profile field types had to be taken into consideration depending upon security and other requirements. Some content types as FAQs, Forums, and Comments were turned off to reduce any hacker attack vectors.

After spending much time learning how to use the complex features of the Apigee Edge backend and the Developer Portal frontend, we transfered this knowledge to our client through training and documentation. For security reasons much of the typical Drupal content is stored in the Apigee cloud, not the Drupal database, so the learning curve was even higher. Maintaining the platform is just as important as development, because after launch the client's staff would be responsible for managing new user signups, importing API swagger changes, managing developer keys, analytics charting, revisioning announcements, newsletters, etc.

The launch was successful and our client Westfield Labs quickly became the masters of their new and poweful API Portal website. Because they chose Deep Drupal to do these heavyweight customizations, they not only saved time and money, but received the focused attention and high-quality craftsmanship befitting for a billion dollar brand like Westfield.

Steven Read has been creating websites since the 1990s and started using Drupal for content management in 2005. He has one degree in Science and another in Art. His software work has earned awards, patents, press, and exhibitions.